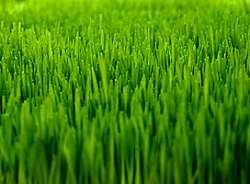 Japonica Zoysia, one of four distinctly different families of Zoysia, is also known as Korean or Japanese Lawngrass.

In 1951, Meyer Zoysiagrass, a Japonica selection made by Dr. Ian Forbes, was released. Soon thereafter Dr. Forbes released Emerald Zoysia, a fine textured hybrid similar to the better strains of Matrella Zoysia. Meyer and Emerald have been popular for 40 years and many people consider them the ultimate in lawn grasses.

Zoysia seed are hand stripped and cleaned in the Orient and have been exported to the U.S. and other countries for many years. Fifty years ago Zoysia researchers were dreaming of and working at finding a Zoysia which would produce a superior turf AND enough seed to justify commercial harvest.

Hundreds of selections were observed and evaluated at the USDA Research Station at Beltsville, MD as well as at other public and private research centers. Plant explorers continue to search for different and better Zoysias in Korea and China, where it has grown “wild” for centuries.

The “Green Revolution” has more than doubled the world’s food supply in the last half of the 20th century, largely through the efforts of plant breeders who created high yielding “hybrids” by cross-pollinating selected parent plants.

Zenith is the progeny of three parent plants which have yellow-white flowers. Each parent was selected for superior attributes such as leaf texture, color, disease resistance, drought tolerance, fall color retention, uniform color when dormant, and early spring greenup.

Zenith is in the Japonica family, as is Meyer Zoysia, and is similar to Meyer in many respects, including blade width and color. It is somewhat less dense, thus making it easier to mow and providing a better opportunity for interseeding with tall fescues for year-round color. Zenith grows well in full sun or under light shade, and is presumed to have good cold tolerance.

When compared with turf produced by Japonica seed imported from the Orient, Zenith is far superior in appearance with a finer blade, brighter color, better rust resistance, much better fall color and earlier spring greenup.

If you are interested in sodding your home or business landscape with Zoysia grass, call or email us today, or use our quick online contact form.