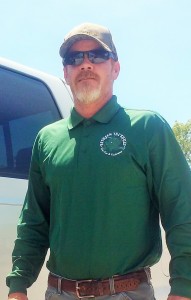 Ever wonder who these guys are that you see all over the CSRA in Between the Edges uniforms? Well here is a quick insight to a great employee.

Chris Swartzbaugh was born in Gastonia, North Carolina and then was raised in Orlando, Florida.  He joined the United States Navy and served four years. While enlisted, he was an aircraft engine mechanic, aviation warfare specialist and a surface warfare specialist. Chris served during the liberation of Kuwait.

Since then, Swartzbaugh moved to North Augusta, South Carolina where he became employed by Between the Edges Lawn Care and Landscaping. He started out as a crew leader and quickly climbed the ranks. Over the past year, Chris has gone above and beyond expectations and was recently promoted to manager. Chris enjoys working for this company and says Between the Edges can best be described as “‘The A Team,’ because of their outstanding quality and first-class relationships.”  Chris stated, “They are great people to work for.”

When Chris isn’t working, he can be found riding his Harley Davidson around town or fishing in his pond.

Owner, Tonya Kelley says, “Since starting with our company, Chris has excelled and quickly became a key employee for us.  He goes above expectations and handles any obstacles thrown at him.  We are fortunate to have such a hard working individual.”